Of Lake Cochituate's chain of ponds, traditionally only the South Pond permits water-skiing. Just north of the southeast corner of Middle Pond, boaters heading for South Pond turn into a small cove.

Once inside this cove, one proceeds to the triangular, slightly-arched tunnel opening - and hopes the boat will fit through.

Canoes and kayaks have no problems, but many power boaters face a tight squeeze. 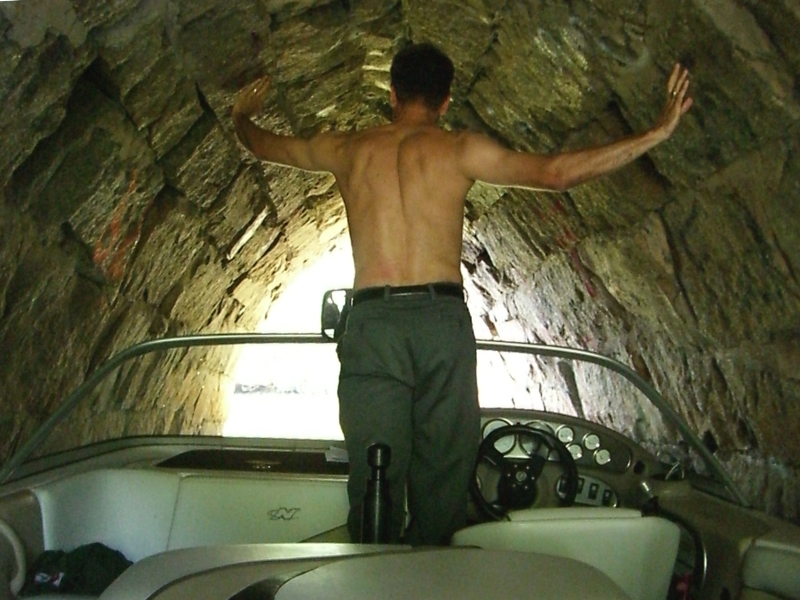 So tight, that it keeps the big boats out. And when the water rises a few inches, this triangular tunnel grows tighter yet. So tight, that some boats have their windshields fastened down using wing nuts, for easy removal when the lake's water level is high. Occasionally a boater may pull the drain plug and flood the floorboards, to drop the boat a few inches. Once through the tight tunnel and back out into the bright daylight, running the bilge pump bails the water out of the boat. Now that's tight!

Although the height of Lake Cochituate is regulated by the dam on North Pond,  Cochituate State Park staff cannot lower the lake much more to cut the boaters more slack. Doing so would cause many boats to run aground on the shallow tunnel bottom.

Luckily for boaters, the Park staff can't raise the lake more, either, because the dam has an important public-safety function: flood control. Staffers watch the weather predictions, to provide temporary holding capacity in the lake. This delays the peak of stormwater runoff from Lake Cochituate and the 27-square-mile watershed (drainage basin) that feeds it. That delay, in turn, removes its contribution from the peak of flooding on the Sudbury and Concord Rivers, downstream.

Surprisingly, this tight tunnel once was extremely spacious. In 1846, when Long Pond was engineered into Cochituate Reservoir, Boston's first public drinking-water supply, a North Pond dam (probably not its first) was built to raise the lake's surface an additional nine feet. At this Middle Pond Tunnel, the new Saxonville Branch Railroad's granite bridge arched well above the lake's blue water. The tunnel interior was a graceful ogive arch.

Detractors had said that Cochituate Reservoir was too grand a design, too far from Boston, and too expensive. They said that Boston wouldn't expand to need that much water capacity for at least two hundred years! But within twenty years, engineers were scrambling to supply more water. They built a new dam, four feet higher. The North Pond Gate House had to be disassembled, granite block by granite block, and reassembled along the raised shoreline. Over a century later, you still can see the contrast between the older stonework along the lake edge there, and the newer stones higher up that retaining wall.

And that's the reason for Lake Cochituate's tightest tunnel. The four feet that raised the water were four feet removed from the tunnel's headroom. The wide, parallel walls now lie hidden, far below where boats squeeze ever so carefully through the narrow top of that lovely ogive arch.